Andrew (Drew) Binnie was born in Port-Glasgow and spent his boyhood days in Largs. He attended Largs High School and Ardrossan Academy and went on to study Drawing and Painting at the Glasgow School of Art , gaining the Diploma in Art. He trained to be a teacher at Jordanhill College of Education, and did two years’ National Service as an Education Officer in the Royal Air Force.

He  married Kathleen, who was a fellow student at Glasgow, and the couple moved to the Borders in 1960 to take up teaching posts. After working in various schools, Andrew finally was appointed Principal Teacher of Art and Design at Earlston High School, where he remained till his retirement.

Throughout his career he has continued to paint and exhibit, having numerous works selected for all the major Scottish exhibitions and holding several  solo exhibitions, also occasionally with his daughter, the water-colour painter Carol Binnie.

He has spent many years enjoying the spontaneity which plein-air painting provides, but is also finding that his earlier method of working from sketches in the studio, in a more considered way, produces a different aesthetic which lays greater emphasis on pattern and colour.

In 2007 Hawick Museum and Art Gallery staged a retrospective exhibition, featuring work over four decades. Many paintings acquired by collectors over the years went on show, including “House among Trees, Bowmont Valley”owned by HRH Duke of Edinburgh, which now hangs in the Royal apartments at Holyrood Palace. 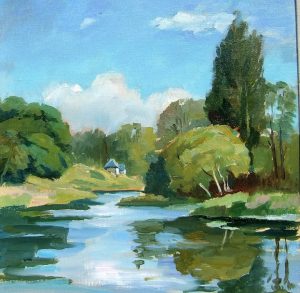